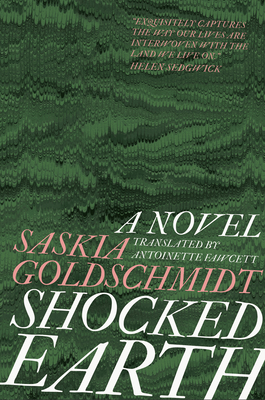 Acclaimed Dutch author Saskia Goldschmidt explores the dangers of industrial gas extraction, changing farming methods and their impact on our environment, and what it means to have your identity intensely entwined with your place of birth, in this compelling family saga.

Femke, her mother Trijn and her grandfather have very different ideas about how to run their family farm. Tensions between mother and daughter are growing; Femke wants to switch to sustainable growing principles, while her mother considers this an attack on tradition. To make matters worse, their home province of Groningen is experiencing a series of earthquakes caused by a gas extraction operation near their farm. While the cracks and splinters in their farmhouse increase, the authorities and the state-owned gas company refuse to offer the local farming community any help.

In Shocked Earth, Saskia Goldschmidt investigates what it means to have your principles at odds with your closest kin. And how to keep standing when the world as you know it is slowly falling apart.

Saskia Goldschmidt is a writer, playwright, theatre producer, and former drama and communications teacher in the Netherlands. She studied at the Arts Academy Utrecht. Her previous novels, The Hormone Factory (2013) and Vintage Queen (2015) have been bestsellers in several countries and translated into six languages. Film rights have been sold to the French production company Film Talents for The Hormone Factory, which was also made into a 12-episode radio serial and podcast. She has also written non-fiction related to her family's traumatic wartime experiences during the occupation of the Netherlands