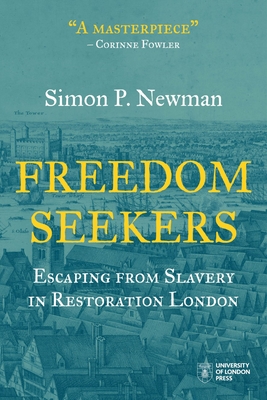 By Simon P. Newman
List Price: $15.00
Our Price: $13.50
(Save: $1.50 10%)
Often on our shelves, but if we're out, we can usually restock quickly
Freedom Seekers reveals the hidden stories of Britain’s enslaved people and their liberation.

This book brings the history of slavery in England to light, revealing the powerful untold stories of resistance by enslaved workers from Africa, South Asia, and First-Nations America forced to work in London as sailors and dockworkers, wet-nurses and washerwomen. Featuring a series of original case studies on those enslaved people who escaped captivity, this volume provides a rich source of information about slavery in eighteenth-century mainland Britain and the “freedom seekers” therein. Using maps, photographs, newspaper advertisements, and more, the book details escape routes, the networks of slaveholders, and the community of people of color across the London region.

Freedom Seekers demonstrates that not only were enslaved people present in Restoration London but that white Londoners were intimately involved in the construction of the system of racial slavery, a process traditionally regarded as happening in the colonies rather than the British Isles. Freedom Seekers is an utterly unmissable and important book that seeks to delve into Britain’s colonial past.
Simon P. Newman is emeritus professor of history at the University of Glasgow and is currently a research fellow at the Institute for Research in the Humanities at the University of Wisconsin. He is the author of A New World of Labor: The Development of Plantation Slavery in the British Atlantic. He helped create the graphic novel Freedom Bound: Escaping Slavery in Scotland.
“Newman’s painstaking research and luminous interpretation reveal a community of enslaved Black people in Restoration England, yearning to escape. Evocative prose and interactive illustrations enable us to imagine their flights on the streets of London, and also to perceive the arterial network of enslavers, merchants, investors, ship captains, and printers, who devised a novel way to repossess them: the runaway slave advertisement.”
— Vincent Brown, author of 'Tacky’s Revolt: The Story of an Atlantic Slave War'

"This compelling book shows us Restoration London, but not as we know it. The book is a restoration in many senses: of dignity and of global context to the world of Samuel Pepys and the Great Fire. Simon Newman humanises those who were dehumanised by people who saw them as their property. Amongst the pages of this compassionate, evidence-based masterpiece, readers will discover the stories of freedom-seeking enslaved people in familiar places all over London, from Aldgate, Covent Garden and Greenwich to Fleet Street, Wapping and the East End. Through painstaking archival work these lives have been impressively reconstructed and reimagined, all underpinned by archival and interpretative rigour."
— Corinne Fowler, director of 'Colonial Countryside: National Trust Houses Reinterpreted'