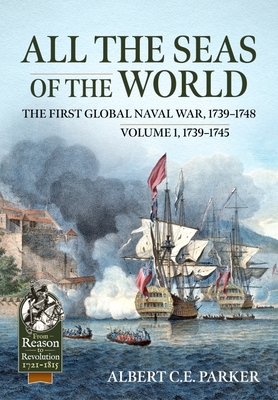 By Albert C. E. Parker
List Price: $80.00
Our Price: $72.00
(Save: $8.00 10%)
Coming Soon - Available for Pre-Order Now
The War of Jenkin's Ear was fundamentally about silver. Silver was the only commodity that Asians would exchange with Europeans for their spices, tea, porcelain, and silk, but most of the world's silver was produced in Spanish America. Anyone who wished to trade in the Far East first had to trade with Spanish America. But Spain, like Britain, had a closed imperial trading system, with only limited legitimate opportunities for trade by British merchants. Attempts by Spanish authorities to prevent 'smuggling' were highly resented in Britain, especially since Spain was regarded as a country of weak, incompetent cowards. When an agreement to settle the resulting disputes foundered in 1739, Great Britain declared war on Spain.

The resulting conflict, named much later after an incident in which a British merchant captain had lost an ear to Spanish customs enforcers, was perforce a maritime war: neither country was in a position to launch a military campaign on its opponent's home territory. The war featured the first incursion by a European state navy into the Pacific Ocean to attack enemy ships and ports and the largest European amphibious expedition so far to the West Indies, resulting in thousands of dead British soldiers and sailors at Cartagena (now in Colombia). Meanwhile, Spanish involvement in the war that had begun over Austrian territory in December 1740 led to extensive British naval operations in the Mediterranean in support of Austria. By 1744, France, unofficially at war with Britain in Europe since 1741 declared war on Britain in February 1744 and sent a fleet into the English Channel to cover an invasion of England. At the same time, the French fleet based at Toulon sortied in conjunction with a Spanish squadron to attack the British Mediterranean fleet. By 1745, British American colonists were attacking a fortified French port on Cape Breton Island (now in Nova Scotia), and the British home fleet was working hard to interdict French attempts to ship men, money, and weapons to support an uprising in Scotland.

All the Seas of the World sheds new light on all aspects of the naval operations of the Spanish, British, and French navies in all theaters of the war which lasted from October 1739 to October 1748. Volume 1 covers naval battles and campaigns from 1739 to 1745, including notable single-ship actions as well as campaigns by fleets and squadrons, in the Bay of Biscay, the English Channel, Mediterranean, the West Indies, and the Pacific Ocean in detail, with full orders of battle for all engagements as well as some campaigns that ended without fighting. The study exposes errors in previous accounts based on only one side's documents, including convoys and fleets that never existed, overestimates and exaggerations of opposing forces and casualties, and misunderstandings of enemy plans and intentions. Use of a wide range of sources reveals naval campaigns omitted from previous literature, such as the extensive Spanish response in the Pacific to the expedition commanded by George Anson, the success of the Spanish navy in carrying and escorting shipments of silver from America, and the strategically successful Spanish sea borne supply operation for their army in Italy.

Volume 1 includes nearly 40 maps showing long-range fleet and squadron movements and the maneuvers of individual ships in fleet, squadron, and single-ships actions, many of them never previously charted. Over 100 tables list the ships assigned to fleets, stations, and squadrons or present at major battles, compare the size and strength of potential or actual opposing forces, list operations or movements over time, or provide detailed information about the ships taking part in notable battles.