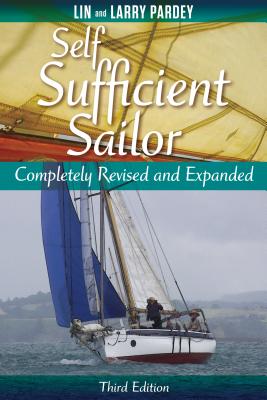 By Lin Pardey, Larry Pardey
List Price: $29.95
Our Price: $26.96
(Save: $3.00 10%)
Often on our shelves, but if we're out, we can usually restock quickly
This book is just what the title says. It is the distillation of what the Lin and Larry learned during more than 47 years of sailing together, years during which they covered more than 200,0000 miles on board their two cutters, Seraffyn and Taleisin, and on scores of other boats they have delivered or raced. Lin and Larry tell how they have sailed in comfort and safety without large cash outlay- on a pay-as-you-earn-as-you-go plan and by simplifying. The first two editions of this invaluable text have seen more than 60,000 copies reach people who dream of setting sail, be it for a weekend voyage across to an offshore island, or for a world circumnavigation. Lin continues voyaging now she is well into her seventh decade of life. Armed with what she is learning as she explores the islands and far corners of the Tasman Sea, she has updated and revised the information found in the original edition plus added several new chapters. Amidst the new material is an extensive look at the lessons learned as she and Larry safely negotiated the stormy waters around Cape Horn. This is the book that could help you cut the ties that bind you to shore.

Lin has voyaged more than 210,000 miles on boats ranging from 24 feet to more than 60 feet in length. Her seminars, the 12 books and 5 videos she created, have encouraged thousands of potential voyagers to set sail. After 47 years of voyaging she settled in at her homebase in New Zealand, to care for Larry through his decline due to Parkinson's disease and dementia. With Larry now in full time care, she has once again set sail towards Australia as crew on David Haigh's 40 foot Van de Stadt, Sahula. Between return visits to see Larry, she looks forward to sharing more cruising. Current residence: Lin divides her time between her home base on Kawau Island, New Zealand and where ever she may be voyaging on board Sahula. Currently Sahula is in Tasmania.