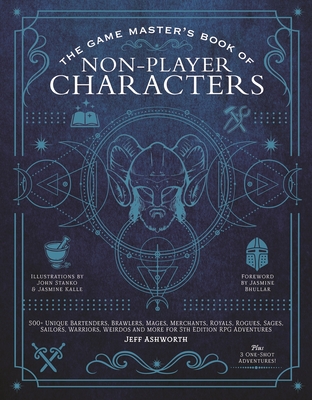 By Jeff Ashworth, Jasmine Bhullar (Introduction by), John Stanko (Illustrator), Jasmine Kalle (Illustrator), Ben Egloff (Contributions by)
List Price: $23.99
Our Price: $21.59
(Save: $2.40 10%)
Often on our shelves, but if we're out, we can usually restock quickly

From the #1 Best-Selling author, Jeff Ashworth, comes the latest addition to The Game Master series, with more than 500 NPCs ready to populate your campaign whenever you need them!

As is often the case in tabletop roleplaying games, players often venture into locales or look for answers in places and among people busy Game Masters simply didn’t anticipate. Or, just as often, an adventure won't have fully fleshed out characters in place for the locations and encounters outlined for gameplay.

The Game Master's Book of Non-Player Characters solves these issues and more by providing Game Masters with the information they need to “fill in the holes” in their campaign play. It will enable GMs to instantly add depth, color, motivation and unique physical characteristics at a moment's notice to unexpected or underwritten characters as they pop up during gameplay, ensuring every session is a memorable one for players and GMs alike.

This edition also includes more than 50 hand-drawn illustrations of select NPCs detailed in the book, 3 bonus one-shot adventures, and a foreword by online influencer Jasmine Bhullar.

Jeff Ashworth is a writer, editor, storyteller and gamer whose credits include work for Disney, Nickelodeon, and World Wrestling Entertainment. When he isn't working on special projects for Newsweek or Media Lab Books, he enjoys playing and designing RPG games with his friends. In his role-playing career he has bested beholders, sweet-talked succubi and devastated dragons without breaking a sweat. In the real world, after failing a late-night Perception check, he was nearly crippled by a foot-piercing d4. He and his wife live in New York City with their dog, Zelda.

Jasmine Bhullar is an actress, internet personality and content creator best known for her daily livestreams at twitch.tv/thatbronzegirl as well as the many RPG productions she's been part of. She's not only an experienced tabletop RPG player, but a skilled Game Master as well. She got her start on Geek & Sundry, which led her to play the infamous "Beryl the Brutal" on Relics and Rarities. She's also the creator, host and GM of Shikar, a new D&D 5th Edition game on Twitch. When she's not reading science fiction novels, Jasmine enjoys creating video game, RPG and comic book content.

John Stanko is an associate professor of graphic design at University of South Florida at St. Petersburg. After working as a designer and art director for over nine years, he earned his MFA from Virginia Commonwealth University in 2005. Some of his clients include TOR books, Nightshade books, Sony Online, Magic the Gathering, Dungeons and Dragons, Fantasy Flight Games, Upper Deck and Star Wars.

Jasmine Kalle hails from the sunny state of Queensland, Australia. She is an artist, mapmaker and RPG enthusiast, with a Master of Arts from the University of Queensland. She has a special love for all things sci-fi and fantasy. She spends her free time playing and leading D&D campaigns, drawing fantastic people and creatures, and petting any cat that may cross her path.

“Where has this book been all my game-mastering life? Finally, relief for the beleaguered GM who dreads the thought of their players deciding to, ya know…talk to people! Stress no more. Everyone—and I mean everyone—is in here.”
—Philip Athans, New York Times bestselling author and former Wizards of the Coast editor

“This book makes your spontaneous storytelling moments feel like you had planned for them all along. Every NPC becomes a potential jumping off point for a new adventure!”
—Pat Kilbane, Director of the D&D documentary The Dreams in Gary’s Basement

"A wonderful resource full of colorful individuals to populate your worlds, but also as a collection of launching points for what could be branching side quests, story arcs or adventure hooks."
—Jasmine Bhullar, @ThatBronzeGirl and Twitch.tv/ThatBronzeGirl

"I cannot wait to use some of these ideas for future campaigns."
—Rex Hadden, MuggleNet