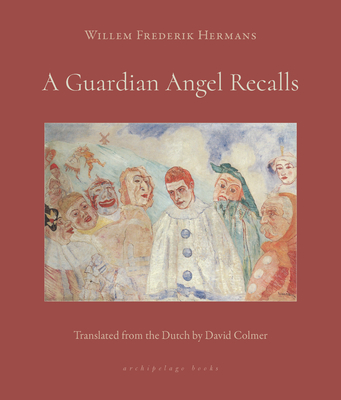 A Guardian Angel Recalls is a gripping and diabolical wartime novel by one of the most provocative Dutch writers of the twentieth-century.

Alberegt, a frenzied and lovelorn public prosecutor, speeds through Hook of Holland in his black Renault on May 9, 1940 – the eve of the German invasion of the Netherlands. Guiding his every move is a guardian angel.

With unflappable patience, the angel flits from the hood of the Renault to the rim of his windswept hat, determined to quell his every anxiety and doubt. The angel's momentary distraction, however, sets off a chain of events that spins a nightmarish web.

Alberegt's elusive companion serves both as narrator and meddlesome driver of the plot, though not without the interventions of a rotating cast of devils.
Willem Frederik Hermans was one of the most prolific and versatile Dutch authors of the twentieth century. He wrote essays, scientific studies, short stories, and poems, but was best known for his several novels, the most famous of which are De tranen der acacias (The Tears of the Acacias, 1949), De donkere kamer can Domecles (The Darkroom of Damocles, 1958), and Nooit meer sleepen (Beyond Sleep, 1966). He received, in 1977, the most prestigious literary award among the Dutch, the Prijs Der Nederlandse Letteren (Dutch Literature Prize).

David Colmer is a writer and translator. He translates Dutch literature in a wide range of genres including literary fiction, nonfiction, children's books, and poetry. He is a four-time winner of the David Reid Poetry Translation Prize and received the 2009 Biennial NSW Premier and PEN Translation Prize. His translation of Gerbrand Bakker's The Twin (Archipelago) was awarded the International IMPAC Dublin Literary Award and he received - along with Gerbrand Bakker - the Independent Foreign Fiction Prize for Bakker's novel The Detour.
"Survival is suddenly uppermost in the minds of the previously complacent characters in A Guardian Angel Recalls, David Colmer’s translation of Willem Frederik Hermans’s deeply sardonic fictional rendition of the first few days of the German invasion of the Netherlands . . . Wickedly enticing."
-- Alida Becker, New York Times Book Review

"[A Guardian Angel Recallsis structured like certain Highsmith novels: a character commits a crime, sometimes involuntarily, and spends the rest of the book hoping to escape his fate or waiting to be apprehended . . . It’s a measure of Hermans’s gifts that we find ourselves so painfully aware of something we may have thought in the dead of night and kept to ourselves when we awoke. He makes us grateful that he has transformed his fears into fiction so vivid and entertaining that we can simultaneously recognize, investigate, and escape our darkest imaginings."Harper's

"Hermans explores moral conundrums through the reckless acts, selfish thoughts, and crises of conscience of his antihero. Better still, his angelic narrator provides insight into life in the Netherlands under the Nazi jackboot, and reflects eloquently on the brutality, but also the futility, of war."
-- Minneapolis Star Tribune

"'A peculiar, undeviating character' – in the words of his admirer Cees Nooteboom – Hermans realized his dark, existentialist vision in an idiosyncratic prose, here seen at its finest. David Colmer’s superb translation is particularly effective when it comes to Hermans’s portrayal of character . . . All are fully humanized, and nuanced, despite their inadequacies in the context of a war from which no one emerges unscathed."
--Paul Binding, Times Literary Supplement

“[Willem Frederik Hermans's] world is bleak, plain and murderous, and sometimes hilarious, which is an unsettling kind of genius.”
--Michael Pye, author of Antwerp

"Influenced by Franz Kafka and Thomas Mann, [Willem Frederik Hermans] produced some of literature’s most profound reflections on the second world war."
--Dalya Alberge, The Guardian

"With its hapless protagonist, acerbic tone, and laughable rumors of war (including German paratroopers disguised as nuns), much of this newly translated 1971 novel by the late Hermans is a comedy of errors. But its scenes of destruction are shattering and surreal . . . A sly but scorching Dutch masterpiece."
-- Kirkus Reviews, starred review

"Hermans interweaves a bitter, occasionally darkly comic moral fable with an unforgettable account of the Nazi invasion of the Netherlands, first published in 1971 and seamlessly translated by Colmer. . . . [A Guardian Angel Recalls] should establish Hermans as a modern Dostoyevsky."
--Publishers Weekly, starred review

"Hermans is one of Holland's great 20th-century writers."
--David Mills, The Times

"Utterly compelling. The force of the narrative . . . rushes the reader along with all the power of a river that has burst its banks and been turned dark and tumultuous by an unstoppable act of nature."
--Duncan Stewart, Exit Only

"A Guardian Angel Recalls is a strong work presenting personal tragedies, and a national one. Alberegt's desperation [is] mirrored, funhouse-like, all around him, a light comic touch just making the overall grimness of the situation all the more clear. A significant work, by a major writer."
--M.A.Orthofer, The Complete Review

Praise for An Untouched House

"It takes an hour or two to read, but An Untouched House is the kind of book that stays with you forever."
--Sam Jordison, The Guardian

"A slim but potent war story . . . Hermans doesn't deliver an explicit moral judgement on the narrator... but the thundering violence of the closing pages sends its own message. Fire, a suicide attempt, torture, and hanging are all shadowed by men killing with a cynical, mocking cruelty, stressing Hermans's point that dreams of peace can easily become entangled in violence. A dark wartime vision that evokes Koestler, Orwell, and Vonnegut."
--Kirkus Reviews, starred review

"Although An Untouched House is brief, it is worth pacing oneself and absorbing its remarkable density. Hermans is the architect of a masterful story - concise but expansive in vision... a lucid, exhilarating account."
--Peyton Harvey, Zyzzyva

"As disturbing and powerful as anything by Joseph Heller or Kurt Vonnegut."
--Michael Faber, The Guardian

"An Untouched House is a small but unforgettable story about the schizophrenia of war. W.F. Hermans's writing is implacably precise, always searching for truth, evocative but austere, and thoroughly addictive. Reader be warned: after An Untouched House you will want to read everything this great European author wrote!"
--Peter Terrin

"It is a novel of desperate survival. But the sensation it transmits is not desperation; rather, the entirety of it, even the horrific scenes of death and torture, feels like a nightmarish dream through which both the reader and the characters wander, without much choice and absolved of all morality... It is perhaps this very immediacy, the apparent inexistence of anything beyond the present moment, which makes Hermans's novella not only bearable, but utterly immersive."
--Juan E. Suarez, Meridian

"The most unsettling book I've read this year, An Untouched House proves the horror and inhumanity of the twentieth century just that: unsettled. Hermans' pithy masterpiece is a warning."
--Hal Hlavinka, Community Bookstore

"In An Untouched House, a disillusioned WWII partisan soldier deserts and finds an abandoned house where he decides to stay. What unfolds is a strange and taut psychological tale of how individuals might choose to ignore the horrors of the outside world until they inevitably come crashing down around them. Ending in an explosion of violence that illuminates the true savagery of the human heart, this little stick of dynamite is less than 100 pages and damn near perfect."
--Keaton Patterson, Brazos Bookstore

"Crackling with uneasy tension . . . A beautiful new edition of a powerful and timeless, slim Dutch masterpiece, written in a spare and crisp style that brings to mind Camus."
--The Lady

"Profoundly unsettling . . . haunts the mind for long afterwards."
--The Sunday Times, A Book of the Year

"Those who do simply open and read will find themselves immersed in a nightmare miniature where philosophical musing gives seamless way to beautiful but unyielding cruelty...this newer translation by David Colmer seems to better capture the unsettling horror."
-- Ben Murphy, Full Stop

"[Willem Frederik Hermans] is such a skilled writer, writing about very serious issues while, at the same time, being often flippant works well to make for a very worthwhile novel."
--The Modern Novel