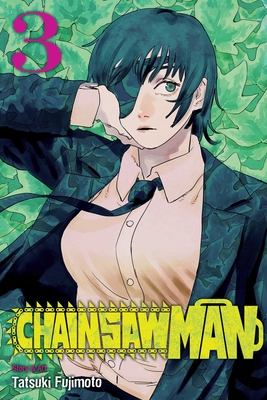 This is book number 3 in the Chainsaw Man series.

Denji was a small-time devil hunter just trying to survive in a harsh world. After being killed on a job, he is revived by his pet devil Pochita and becomes something new and dangerous—Chainsaw Man!

A mysterious devil is demanding Denji’s heart! But will the devil hunters from Division 4 agree to this deal to save themselves? Or will Denji have to do what Denji does best—turn into a chainsaw and carve up everything that gets in his way?!
Tatsuki Fujimoto won Honorable Mention in the November 2013 Shueisha Crown Newcomers’ Awards for his debut one-shot story Love is Blind. His first series Fire Punch ran for eight volumes. Chainsaw Man began serialization in 2018 in Weekly Shonen Jump.