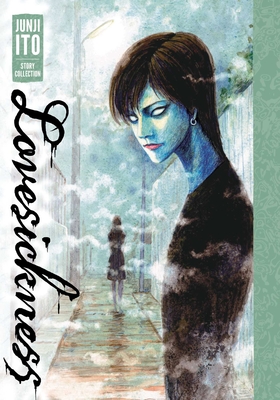 An innocent love becomes a bloody hell in another superb collection by master of horror Junji Ito.

Ryusuke returns to the town he once lived in because rumors are swirling about girls killing themselves after encountering a bewitchingly handsome young man. Harboring his own secret from time spent in this town, Ryusuke attempts to capture the beautiful boy and close the case, but…

Starting with the strikingly bloody “Lovesickness,” this volume collects ten stories showcasing horror master Junji Ito in peak form, including “The Strange Hikizuri Siblings” and “The Rib Woman.”
Junji Ito made his professional manga debut in 1987 and since then has gone on to be recognized as one of the greatest contemporary artists working in the horror genre. His titles include Tomie and Uzumaki, which have been adapted into live-action films; Gyo, which was adapted into an animated film; and his short story collections Fragments of Horror, Frankenstein, Shiver, Smashed and Venus in the Blind Spot, all of which are available from VIZ Media.

His collection Frankenstein won the 2019 Eisner Award in the "Best Adaptation from Another Medium" category, and he has received critical acclaim for his spectacular long-form manga adaptation of Osamu Dazai’s 1948 novel No Longer Human.
"Ito’s boundless imagination and his skill for evoking dread and visceral terror are on full display in this collection." — Library Journal starred review
— Library Journal, Tom Batten