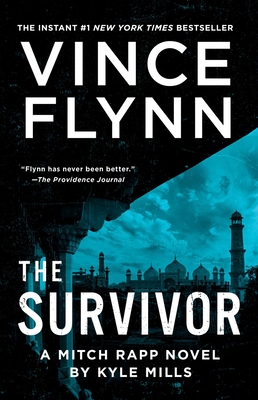 This is book number 14 in the A Mitch Rapp Novel series.

The #1 New York Times bestselling novel that picks up where the “tight, right, and dynamite” (Star Tribune, Minneapolis) The Last Man left off, The Survivor is a no-holds-barred race to save America…and Mitch Rapp’s finest battle.

When Joe “Rick” Rickman, former golden boy of the CIA, steals a massive amount of the Agency’s most classified documents in an elaborate betrayal of his country, CIA director Irene Kennedy has no choice but to send her most dangerous weapon after him: elite covert operative Mitch Rapp.

Rapp quickly dispatches with the traitor, but Rickman proves to be a deadly threat to America even from beyond the grave. In fact, mysterious tip-offs are appearing all over the world, linking to the potentially devastating data that Rickman managed to store somewhere only he knew.

It’s a deadly race to the finish as both the Pakistanis and the Americans search desperately for Rickman’s accomplices, and for the confidential documents they are slowly leaking to the world. To save his country from being held hostage to a country set on becoming the world’s newest nuclear superpower, Mitch Rapp must outrun, outthink, and outgun his deadliest enemies yet in this heart-pounding adventure that proves that Vince Flynn “is a master—maybe the master—of thrillers in which the pages seem to turn themselves” (Bookreporter).
#1 New York Times bestselling author Vince Flynn (1966–2013) created one of contemporary fiction’s most popular heroes: CIA counterterrorist agent Mitch Rapp, featured in thirteen of Flynn’s acclaimed political thrillers. All of his novels are New York Times bestsellers, including his stand-alone debut novel, Term Limits.

Kyle Mills is the #1 New York Times bestselling author of twenty-one political thrillers, including Total Power, Lethal Agent, and Red War for Vince Flynn and The Patriot Attack for Robert Ludlum. He initially found inspiration from his father, the former director of Interpol, and still draws on his contacts in the intelligence community to give his books such realism. Avid outdoor athletes, he and his wife split their time between Jackson Hole, Wyoming, and Granada, Spain. Visit his website at KyleMills.com or connect with him on Twitter, Facebook, and Instagram @KyleMillsAuthor.
"Flynn is a master--maybe the master--of thrillers in which the pages seem to turn themselves."
— Book Reporter

“The biggest compliment one can give Mills is that it's totally unclear where Flynn's work ends and his begins, in The Survivor.”
— San Jose Mercury News

“Mills has created a wonderful tribute to Flynn while also writing a great novel. While thriller readers and fans miss Flynn, Mills was the perfect choice, and Rapp will continue in good hands.”
— Associated Press

“Mills perfectly treads the line of bringing his own considerable talent and style to the table while being respectful of the source material and seemingly channeling Flynn’s own voice.”
— Bookreporter.com

“The book is vintage Flynn/Rapp.”
— The Post and Courier (Charleston, SC)

"Give this book a try."
— The Daily Pundit

“For readers who enjoy great spy and clandestine espionage novels, The Survivor is an excellent read. Plan on burning the "midnight oil" once the first page is read…destined to be a great success.”
— Green Valley News