Vote for Our Future! (Hardcover) 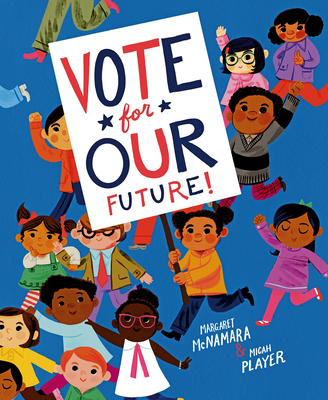 Vote for Our Future! (Hardcover)

“Your vote counts — just ask the students at Stanton Elementary School, who are making their voices heard and working hard to get out the vote. Vote for Our Future! explains the voting process in vivid illustrations and language that children — and adults! — can easily understand. An important and timely book that would work well in an elementary classroom and with parents who want to discuss this topic with their children.”
— Judy Hayes, Kids Ink Children's Bookstore, Indianapolis, IN

In this charming and powerful picture book about voting and elections, the students of Stanton Elementary School learn how we can find--and use--our voices for change.

Every two years, on the first Tuesday of November, Stanton Elementary School closes for the day. For vacation? Nope! For repairs? No way! Stanton Elementary School closes so that it can transform itself into a polling station. People can come from all over to vote for the people who will make laws for the country. Sure, the Stanton Elementary School students might be too young to vote themselves, but that doesn't mean they can't encourage their parents, friends, and family to vote! After all, voting is how this country sees change--and by voting today, we can inspire tomorrow's voters to change the future.
Margaret McNamara is the author of the Mr. Tiffin Classroom series, including The Dinosaur Expert, A Poem in Your Pocket, The Apple Orchard Riddle, and How Many Seeds in a Pumpkin? She is also the author of Eliza: The Story of Elizabeth Schuyler Hamilton, which Booklist called "lovely" in a starred review. Ms. McNamara lives in New York City. Visit her on the Web at margaretmcnamara.net.

Micah Player is a former creative director of Paul Frank Industries and the co-founder and former creative director of Lately Lily. He began his illustration career designing characters, graphics, and style guides for the apparel industry. He is the author/illustrator of the picture books Chloe, Instead and the Lately Lily series. Visit him on the Web at speedballart.com.
Praise for Margaret McNamara's Vote for Our Future!

“Essential—the energetic narrative and uplifting illustrations will inspire and empower young readers to get out the vote.” —Kirkus Reviews, starred review

“An exhilarating tribute to junior grassroots organizing that might just inspire a Get an Adult to Vote movement.” —Publishers Weekly

"A pivotal moment in a child's life, handled with grace and sensitivity rather than conflict or ineffective lecturing." —Kirkus Reviews, starred review

"This story is illustrated with great care and attention to detail from page one, and the text and artwork work together in harmony to bring home powerful messages about gender equality, evolving to improve, and being careful with the feelings of others." —School Library Journal, starred review