Tower of God Volume One (Paperback) 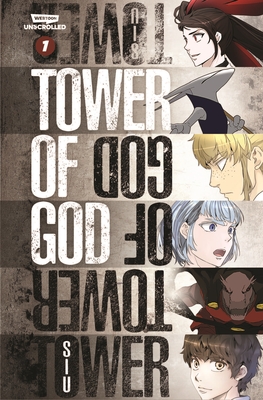 Tower of God Volume One (Paperback)

Twenty-Fifth Bam must journey skyward in a mysterious tower if he has any chance of reuniting with his best friend Rachel, even if that means facing his own death.

Before mysteriously disappearing into the tower gates before his very eyes, Rachel cautions Bam to forget all about her. Unwilling to lose her, Bam enters the Tower completely surrounded by Shinsu — a divine and magical water, at his own peril.

The Tower itself contains multitudes of floors as vast as continents, each one with its unique geography, language and culture. Confronted by skillful tests each step of the way, Bam meets powerful guardians and otherworldly environments, making his quest to the top no easy feat.

Beginning his journey, Bam is met by Headon, the first floor guardian and caretaker of the Tower who explains the rules of the Tower. At each level Bam is constantly tested for his strength, dexterity and wit. With help from fellow travelers and unlikely villains, Bam makes both allies and enemies in order to find Rachel; however her intentions of reconnecting with him become unclear as misinformation about her whereabouts do not add up. Behind each ascension is a revelation about their friendship, revealing a much deeper, darker secret.

Lee Jong-hui, also known by the pen-name S.I.U. (“Slave In Utero”) is the creator of Tower of God. Having majored in visual arts education at the university level before being conscripted into the South Korean military, S.I.U. started drawing cartoons at the advice of a senior in the army. During this period, S.I.U. drew “ten books’” worth of practice cartoons, which formed the backbone of the Tower of God comic he later started to create for the Internet.
“S.I.U.’s fluidly lined art, rendered in a classic manga style, features subdued colors and predominantly black backgrounds, imparting a void-like immensity that complements the setting’s expansive, fantastical inner workings.” —Publishers Weekly