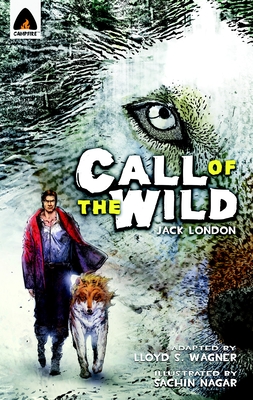 By Jack London
List Price: $9.99
Our Price: $8.99
(Save: $1.00 10%)
Often on our shelves, but if we're out, we can usually restock quickly
Buck is a four year old shepherd dog living a pampered life as an estate dog. His life changes when he is suddenly kidnapped and sold into service during the Klondike gold rush, for he is made to haul heavy sleds through the deep snow fields. Being in a new environment, he soon discovers his dominant primordial instinct. He learns not only to survive, but also flourishes in it.

Jack London's The Call of the Wild is a masterpiece in both its style, which set a standard for generations to come, and for its genre, raising adventure writing to the level of classic literature. Exciting and entertaining, Buck's story is also intelligent and thought provoking - a story for all ages.
Jack London, whose real name was John Griffith Chaney, was born 12th January 1876 in San Francisco, America.
A resounding theme in his literary work was one of a struggle to survive. London's upbringing and his experiences in later life would serve as the grounding for his unique style of writing.
Although deserted by his father, London was raised by his spiritualist mother who was known for her eccentricity. By the age of 14, London was developing a taste for adventure and he left school to work for a government fish patrol. He would later join the navy, and would explore most of America by travelling as a hobo on freight trains.
In 1897 Jack London travelled to the Klondike hoping to strike it rich in America's last gold rush. While he did not find gold in the harsh arctic wilderness, London did discover a wealth of material he would later fashion into two of his best known novels, Call of the Wild and White Fang.
Published in 1903, Call of the Wild benefited from the rise of the modern press and publishing industry, becoming immensely popular and launching London's career. Over the following years London wrote prolifically, drawing again on his Klondike adventure for White Fang and his experiences at sea as a young man for The Sea Wolf.
London died on 22nd November 1916.
"A top-notch graphic adaptation of one of my favorite classic novels. This graphic version is amazingly true to the novel. It evokes the same emotions and is as powerful a story as the novel. I can not think of anything that has been left out. . . . The illustrations are highly detailed with full backgrounds, using artistic devises and a pleasure to behold."


"I highly recommend Campfire’s comics. They do what they are intended to do and do it in  a way that excites kids about classic literature."

— Chris Wilson, The Graphic Classroom (a resource for teachers and librarians)