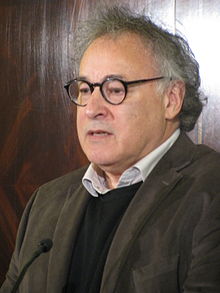 Howard A. Norman (born 1949), is an American writer and educator. Most of his short stories and novels are set in Canada's Maritime Provinces. He has written several translations of Algonquin, Cree, and Inuit folklore. His books have been translated into 12 languages.

After dropping out of high school, Norman moved to Toronto. Working in Manitoba on a fire crew with Cree Indians, Norman became fascinated with their folkstories and culture. He spent the next sixteen years living and writing in Canada, including the Hudson Bay area and the province of Newfoundland and Labrador. During this time, he received his high school equivalency diploma, and studied later at Western Michigan University Honors College, where he received Bachelor of Arts degrees in zoology and English in 1972. In 1974, he earned a Master of Arts degree from the Folklore Institute of Indiana University linguistics and folklore.

In 1999, Norman taught at Middlebury College in Vermont. Norman became Goucher College's Writer in Residence in 2003. In 2006, he was appointed a Marsh professor at University of Vermont. Norman now teaches creative writing in the Masters of Fine Arts program at the University of Maryland, College Park.

The Bird Artist: A Novel (Paperback)

Howard Norman's The Bird Artist, the first book of his Canadian trilogy, begins in 1911. Its narrator, Fabian Vas is a bird artist: He draws and paints the birds of Witless Bay, his remote Newfoundland coastal village home. In the first paragraph of his tale Fabian reveals that he has murdered the village lighthouse keeper, Botho August.

Jacob Rigolet, a soon-to-be former assistant to a wealthy art collector, looks up from his seat at an auction—his mother, former head librarian at the Halifax Free Library, is walking almost casually up the aisle.

“Norman elegantly crafts a murder story that isn’t a mystery; a ghost story without shivers.

I Hate To Leave This Beautiful Place (Paperback)

“The events of a single episode of Howard Norman’s superb memoir are both on the edge of chaos and gathered superbly into coherent meaning . . .

With tales from the tribal peoples of Greenland, Canada, Siberia, Alaska, Japan, and the polar region, told and retold during months-long winter nights, Northern Tales gathers together a rich diversity of traditions and cultures, spanning the Way-Back Time through the coming of the first white explorers.