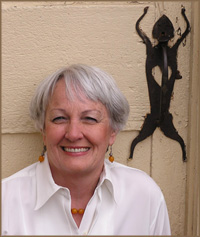 Lisa Alther was born in 1944 in Kingsport, Tennessee, where she went to public schools. She was graduated from Wellesley College with a BA in English literature in 1966. After attending the Publishing Procedures Course at Radcliffe College and working for Atheneum Publishers in New York, she moved to Hinesburg, Vermont, where she has lived for 45 years, raising her daughter. She taught Southern literature at St. Michael's College in Winooski, Vermont, and at East Tennessee State University, where she was awarded the Basler Chair. Having lived in London and Paris, she currently divides her time among Tennessee, Vermont, and New York City.

Alther is the author of six novels -- Kinflicks, Original Sins, Other Women, Bedrock, Five Minutes in Heaven and Washed In The Blood as well as a memoir (Kinfolks), a narrative history on the Hatfield-McCoy feud (Blood Feud) and a short story collection (Stormy Weather And Other Stories). Three of these were Book-of-the-Month Club selections, and four were New York Times bestsellers. Her books have been translated into 17 other languages and have appeared on bestseller lists worldwide. A novella entitled Birdman of the Dancer, based on a series of monotypes by the French artist Francoise Gilot, has been published in Holland, Denmark and Germany. For biographical information and critical discussion of her work, see Contemporary Authors, Contemporary Literary Criticism, Contemporary Authors New Revision Series, Major Twentieth Century Writers, Gay and Lesbian Literature, Literature of the Appalachian South, and the Oxford Companion to Women Writing in the United States.

About Women: Conversations Between a Writer and a Painter (Hardcover)

A provocative and wide-ranging conversation between two distinctive women—one American and one French—on the dilemmas, rewards, and demands of womanhood.

Blood Feud: The Hatfields And The Mccoys: The Epic Story Of Murder And Vengeance (Paperback)

America's most notorious family feud began in 1865 with the murder of a Union McCoy soldier by a Confederate Hatfield relative of Devil Anse Hatfield. More than a decade later, Ranel McCoy accused a Hatfield cousin of stealing one of his hogs, triggering years of violence and retribution, including a Romeo-and-Juliet interlude that eventually led to the death of one of McCoy's daughters.

Stormy Weather & Other Stories is probably as close as Lisa Alther will ever come to writing an autobiography. These stories, written over the course of her career, are set in the three places that have meant the most to her the Southern mountains, Vermont, and New York City. Most of these stories were published in journals or anthologies, though three are previously unpublished.

Washed in the Blood (Hardcover)

This unique three-part novel assumes that, regardless of what Americans learn in school, the Southeast was not a barren wilderness when the English arrived at Jamestown. Based on extensive research into the racial mixing that occurred in the early years of southeastern settlement, this provocative multigenerational story shows that these people did not simply vanish.