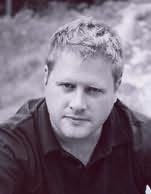 Thomas Christopher Greene was born and raised in Worcester, Massachusetts, to Richard and Dolores Greene, the sixth of seven children. He was educated in Worcester public schools and then Suffield Academy in Suffield, Connecticut. He earned his BA in English from Hobart College in Geneva, New York, where he was the Milton Haight Turk Scholar. His MFA in Writing is from the former Vermont College.

In 2003, Tom's first novel, MIRROR LAKE, was published to critical acclaim. His second, I’LL NEVER BE LONG GONE, followed two years later and his third, ENVIOUS MOON, was published in 2007. His fiction has been translated into 11 languages and has found a worldwide following. His writing has been called incandescent and poetic and has been nominated for the IMPAC Dublin Literary Award. His first novel was named by Waterstone’s in the UK one of the 30 books to be rediscovered, alongside books by authors Kurt Vonnegut, Jose Saramango, Alice Hoffmann and others.

In 2006, after years of writing full time, Tom was asked to lead one of the MFA programs at Vermont College where he had graduated from and had previously served as a senior administrator. On June 23, 2008, Vermont College of Fine Arts became the first new college in Vermont in over 30 years. It was the fastest college in the 125-year history of the New England Association of Schools and Colleges to achieve accreditation. Tom was named the college’s founding President, a position he still serves in today.

In the seven years since its inception, Tom has led Vermont College of Fine Arts on a mission to become a national center for education in the arts. Its writing programs enjoy top national rankings, and he has started new programs in graphic design, music composition, film, writing and publishing, and an MA in art and design education. Today, under his leadership, Vermont College of Fine Arts has arguably a greater influence on American Arts and letters than any small school since the heyday of Black Mountain College almost a century ago.

The Headmaster's Wife: A Novel (Paperback)

If I Forget You: A Novel (Paperback)

Twenty-one years after they were driven apart by circumstances beyond their control, two former lovers have a chance encounter on a Manhattan street. What follows is a tense, suspenseful novel about enduring love.

The lives of brothers Charlie and Owen Bender are changed forever on the night their father walks into the Vermont woods with a death wish and a shotgun. The second shock comes when his suicide note bequeaths the family's restaurant to Charlie alone, while leaving Owen with instructions to follow his own path, wherever it may take him.

Mirror Lake brilliantly explores life, death, love, and loss against the backdrop of rural Vermont and the drama of its seasons.
Nathan Carter, a man in his twenties, moves from Boston to Eden, Vermont, following the death of his father and the end of yet another failed romance.